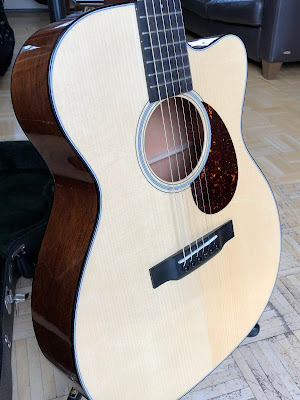 Covid definitely put a damper on face-to-face transactions for the better part of a year. More recently, though, I could not resist a local Craigslist alert for a Martin Custom Shop guitar in pristine condition selling for less than half the original list price of over $5,000. The owner apparently had some arthritis issues that hindered his ability to continue playing. We were in correspondence less than an hour after the listing went up, and he already had multiple interested parties, including from out of state. When we did meet up in an outdoor location, the guitar was exactly as advertised. One quick Venmo transaction later, I drove off with my prize.

This Martin Custom Shop OM18 Cutaway has a solid Adirondack Spruce top and bracing, solid Mahogany back and sides, and an Ebony bridge. With it's light orchestra-size body, 2 5/16" bridge, and 1 3/4" nut, it is a perfect finger-picking guitar. 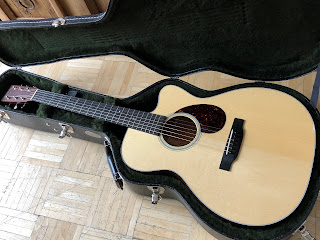 The guitar was in mint condition and came with the original Martin hardshell case with a plush dark green liner. It sounds clear as a bell and is a pleasure to play up and down the neck. The woody aromas and tight craftsmanship add to the joyful experience. This one is a keeper.

Merry Christmas and Happy Holidays to all, and may your GAS be treated to the occasional serendipitous find. Cheers.

Posted by Acoustic Picker at 3:04 PM No comments:

When I travel, I am in the habit of scoping out local high-end guitar shops for any interesting used acoustic guitars. Staff at these places work there because they love guitars too, so it's easy to just walk in and ask if anything interesting has come in recently. They will be happy to tell you which guitars they are excited about. 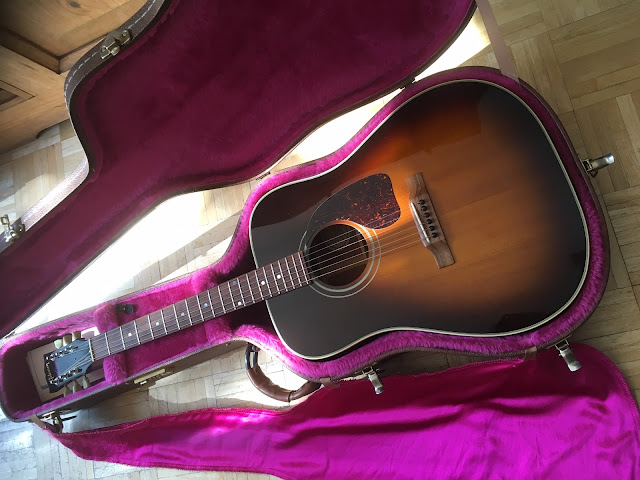 While in Milwaukee last week, I stopped by my favorite guitar shop there: Wade's Guitar Shop. They pulled down for me a 1990 Gibson J-30 with Vintage Sunburst finish that had just come in two days prior from the original owner. 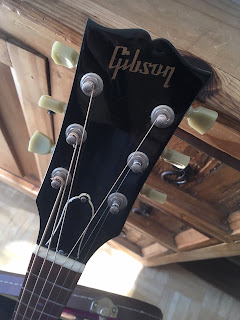 The Gibson J-30 was made from 1985-1998. It is a dreadnought model with a Spruce top and Mahogany back and sides. It was/is popular as a poor-man's Hummingbird as it shares the same specifications without the higher end appointments and pricier tag.

The guitar was in surprisingly excellent condition and, having benefitted from an in-shop set-up, it was a pleasure to play. I appreciated the slenderer neck profile than on other Gibson acoustics I've come across. The kicker was when the staff pulled out its beautiful original deluxe Gibson case in excellent condition as well. After Wade was willing to work with me on the asking price to include shipping it back home, I pulled the trigger on my very first Gibson guitar. This is going to be a lot of fun to play, and such a pleasing guitar should be easy to pass along to another happy owner eventually.
Posted by Acoustic Picker at 11:46 AM No comments: The asking price for this Yamaha FGX730SC guitar on Craigslist one town over had me intrigued. The FGX730SC was introduced in 2008. It is an acoustic electric guitar with a cutaway body, solid Sitka Spruce top, Rosewood back and sides, bound Rosewood fingerboard, and mother-of-pearl inlayed name and logo on the headstock. The A.R.T. one-way piezo/preamp system with three-band EQ, adjustable midrange frequency control, and built-in chromatic tuner, allows for easy plug-in amplification. Current MSRP is $815 with a street value price around $500. Blue Book value has it at $350-430 in excellent condition.

Turns out this had been a travel guitar (without a case or gig bag!) for ten years and, besides the usual minor scratches, had a couple dings, one in the lower and upper bout, respectively. It was also in need of a good cleaning. The electronics were in working order, with a brand new battery according to the seller. Other than the cosmetic issues, it was good to go. I negotiated another 33% down from the asking price and brought my prize home. Cleaned up and with a repurposed case, this FGX730SC will make an attractive and durable addition to someone's guitar arsenal without breaking the bank.
Posted by Acoustic Picker at 3:15 PM No comments: 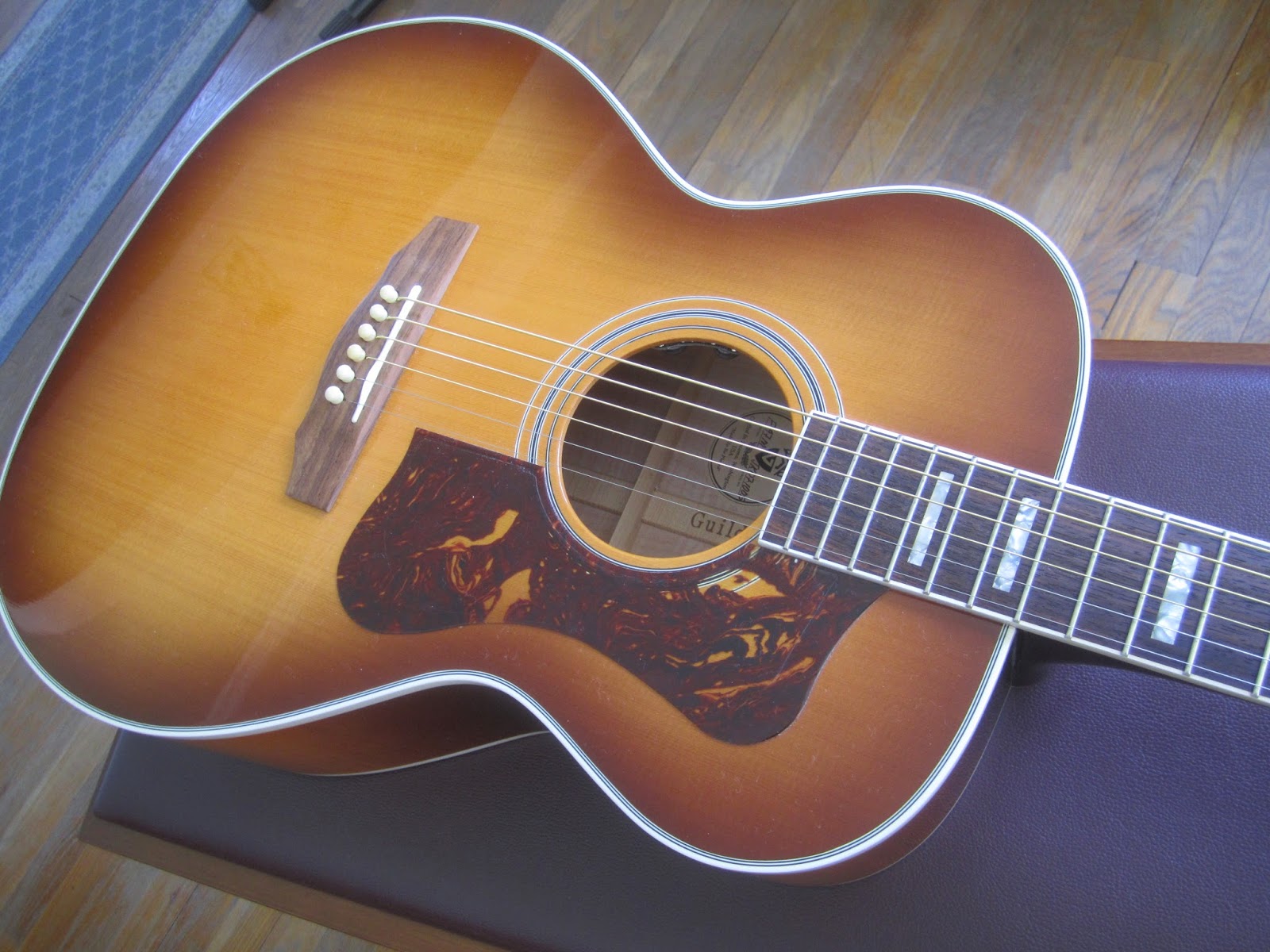 There is an advantage to being a fan of the under-appreciated Guild acoustic guitar - there are far fewer online bidders even on a national platform like eBay so it is easier to get a good deal. 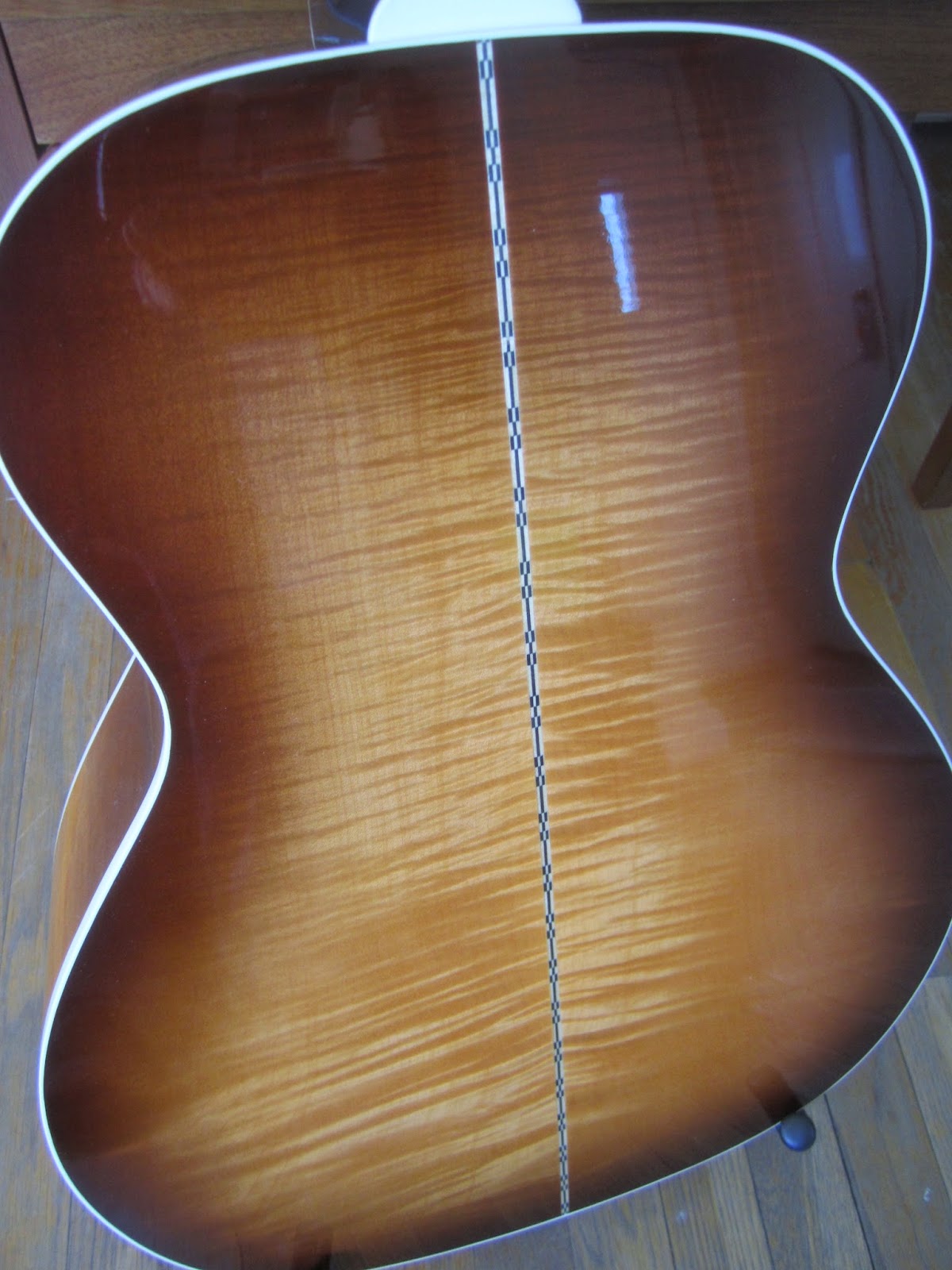 The smaller body makes it a comfortable fingerpicking guitar, without sacrificing good volume and great sustain. The Maple body ensures a warm overall tone. With new strings on, this Guild F-47M is a pleasure to play. I should have no trouble finding it a good home. Happy New Year! 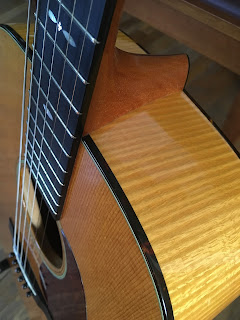 Sometimes you just get lucky and a unique guitar becomes available at an attractive price. Thank you Craigslist!

The Martin D-62LE (Limited Edition) was Martin's custom-built Guitar of the Month for October 1986. Only 48 were made. It features flamed maple back and sides with a Sitka spruce top, scalloped forward-shifted X top bracing, tortoise-shell binding, style 42 snowflake fingerboard inlays, and a label hand-signed by C.F. Martin IV. Not only is this apparently Martin's first maple dreadnought model, but this model has a wider neck that measures 1-7/8" at the nut, unusual in a 14-fret guitar. My online alerts had flagged this listing, but it was originally being offered on the high end of Blue Book value at $2,250. Several price reductions later to below Blue Book, my interest was piqued. 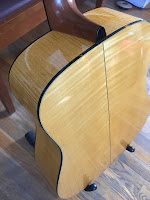 I drove 45 minutes to check it out and it did not disappoint. Maple has a warm quality, which was amply evident in this 30+ year-old guitar. The action and crispness of the sound at both the high and low ends of the register were perfect. The tuners and pins had been upgraded and the frets dressed. The Sitka top had aged to a pleasing honey gold tone. With only very minor dings and some limited finish crazing this was a lightly played and well-cared for guitar. The original Martin case, a sound-hole humidifier, and couple sets of new strings rounded out the package. I paid the asking price.

I think I'll be holding on to this one!
Posted by Acoustic Picker at 5:44 PM No comments: 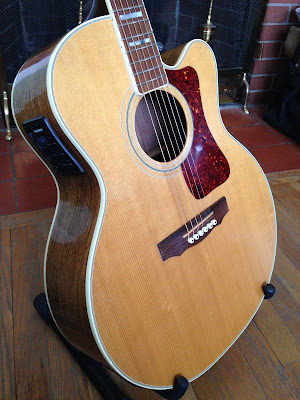 It's no secret that I'm a Guild acoustic guitar fan. In fact, scoring a used 2001 Guild F47-RCE guitar off of Craigslist a few years ago is what lured me back into the hunt for fine acoustic guitars on the second-hand market and led to this blog. I still enjoy that guitar and I've since also owned a 1999 F47-RCE, so when I saw a Guild F47-RCE in good condition listed on eBay recently for a starting bid of $699 with no reserve, I was interested. Especially as this now-discontinued model (last made in 2003) is rarely available and the only other current online listing I could find was on Reverb for more than twice as much.

The Guild F47-RCE has a cutaway grand concert-style body (with 4.8" body depth, 25-5/8" scale length, and 1-11/16" nut), solid Spruce top, solid Rosewood back and sides, scalloped bracing, Mahogany neck with bound Rosewood fingerboard and pearloid block inlays, and logo and Chesterfield pearl inlays on the headstock. This particular Guild F47-RCE was made in Corona, CA, after Fender purchased Guild and moved the Guild manufacturing plant from its long-time home in Westerly, R.I. An obvious difference with the Westerly model is the Chrome tuners instead of the earlier Gold Grover tuners. This particular guitar also has a noticeably downgraded Fishman pickup and EQ preamp system, but on the plus side the bridge pins had been upgraded to ones with Mother of Pearl dots. The guitar last listed for $2,400 new and has a Blue Book value of $1,300-1,450 in excellent condition. 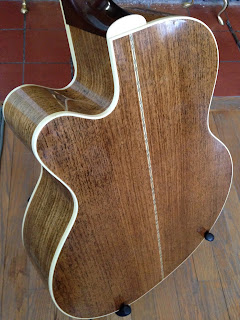 Guild manufacturing has since moved again (several times) since Corona, and apparently the Corona plant serial number records were lost along the way. Unable to confirm the year of this Corona-made guitar against official Guild lists, I turned to Hans Moust, unofficial Guild historian and author of The Guild Guitar Book-The Company and the Instruments, 1952-1977, who was not beyond rescuing records from Guild's dumpsters. Checking his own records against the serial number I provided him, Hans was able to date this guitar to 2002. Should you need his help as well, Hans can be reached at www.guitarsgalore.nl.


With only two other eBay bidders interested in this guitar on the listing's last day, I was able to SnipeIt! for not too much more than it's starting bid! For those unfamiliar with auction sniping services, these allow you to place your bids outside of the eBay platform so as not to show your hand and heat up the bidding until the last few seconds when the service will automatically enter your bids up to your maximum bid. For a small fee, you can thus save lots of money by not giving other bidders a chance to increase their maximum bids if they are outbid by just a few dollars. The guitar having arrived in good shape, it's now time to give it a little TLC, including some cleaning and new strings so I can enjoy it before passing it along to someone who can appreciate it as well.
Posted by Acoustic Picker at 7:12 PM 6 comments: 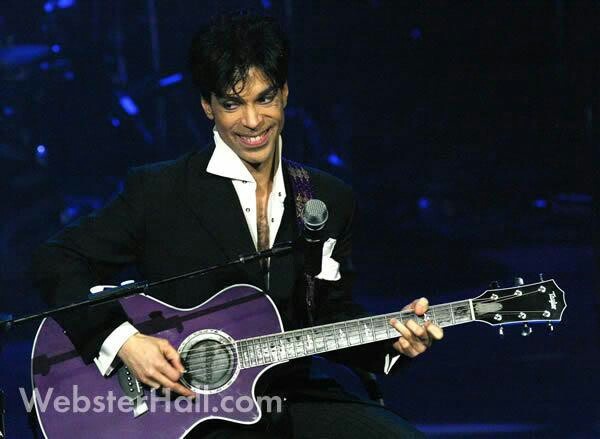 The recent untimely passing of Prince has brought to the fore what a brilliant guitarist he was. Best known for iconic electric guitar riffs and grooves, here he is showing his amazing acoustic guitar feel on a custom purple Taylor grand concert guitar. This is from a short acoustic guitar set from the MTV special Prince: The Art of Musicology in 2004.

Prince featured this guitar as part of a more extended acoustic set throughout his Musicology tour in 2004. Taylor later issued a special limited run of these guitars, a purple Taylor 612 CE. It features a purple-stained select Spruce top and three-piece flame maple. They can still be found second-hand. Here is a recent listing on Reverb.

And how about that lucky fan to whom Prince gifted his purple guitar at the end of the set?! Classy.