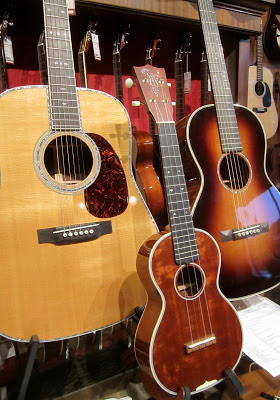 I had the privilege of hearing Ed Golden, retiring manager of the Martin Custom Shop after 20 years with Martin, play and speak about a selection of Custom Shop guitars he had designed from a size 5 up to a Dreadnaught this evening at the Music Emporium. It was part of a broader presentation about the history of the family-run Martin Guitar Company founded in New York City in 1833 and currently run by the fifth generation of Martins.

Martin guitars enjoy a devoted following because of the quality of the construction and their consistent Martin "tone." Some of the most prized Martin guitars are 70 years old and up. What the Custom Shop has been able to do in more recent years (they have now grown to 14 artisans in the Custom Shop) is respond to a strong demand for meeting individualized design requests while maintaining signature Martin elements from their traditional lineup. Available "aux choix" now are all of Martin's current and past body sizes, neck lengths and profiles, nut and bridge widths and designs, and appointment styles such as "18," "28," "35," "45," and even "100."

Every prospective Martin guitar owner now has the ability to design their ideal instrument based on their playing style and subjective preferences. While custom upgrades that can include exotic woods and specially-designed inlays will be pricey, a Custom Shop Martin guitar that simply includes standard elements that are not currently available in the combination you desire need not be prohibitively more than a regular production model. Keep in mind, though, that you will have to wait about eight months for your own signature guitar to be made due to the high demand!
Posted by Acoustic Picker at 10:39 PM No comments:

Lowden guitars are handcrafted in Ireland. With current MSRPs starting around $4500 and reaching into the five figures for models made out of reclaimed Brazilian Rosewood, these boutique guitars are for the professional or avid connoisseur of fine guitars. One of my guitar heros Pierre Bensusan plays his own signature model Lowden guitar.

English guitarist Jon Gomm bought his used 1990 Lowden O12C acoustic guitar "Wilma"in 2000. He has since put thousands of shows and miles on it while touring the world. His original playing style integrates percussion and rythmic scratching (inspired by his early experience with Flamenco guitar) giving his instrument the visible wear and tear of a touring musician's life. The guitar is admittedly beat up, but boy does it still respond on stage. Here is Jon's hit "Passionflower" that went viral last year after several well-known personalities tweeted this YouTube clip (currently at 4.5M views).

Jon plays the piece above with his Lowden tuned to Eb G Bb F G Bb. He's installed banjo tuning pegs for the bottom two strings so he can tune these strings up a whole step and back during the piece. Those are hand-made Newtone strings, which can be ordered with a larger diameter core that will tune down without losing the tension of a standard tuning string. The guitar's electronics are a Fishman Rare Earth humbucker and microphone system and a Fishman Acoustic Matrix transducer. Each pickup goes through one of Jon's three Boss PQ3B parametric EQ pedals and he uses a Tech 21 Blonde overdrive pedal, a Boss OC3 octave pedal, and Line 6's Echo Park delay and Verbzilla reverb pedals for effects.

Once you've experienced the music that Jon and his Lowden O12C guitar make together, you will have some insight into the intimate relationship between performer and instrument that Jon shares with his beloved Wilma! Enjoy.
Posted by Acoustic Picker at 10:06 PM 1 comment:

Brad Carter is an actor and former musician suffering from Parkinson's disease a progressive neurological disorder. In an effort to reverse the hand tremors that had cut his musical career short, doctors at UCLA Medical Center successfully implanted a brain pacemaker during an awake brain surgery last week. While this in itself is not unusual, doctors live tweeted the operation, including Brad testing his fine motor skills by playing his guitar during placement of the electrode in his head.

The unique resonator guitar Brad is playing above is handmade by Kurt Schoen in Washington State. Schoen electric and resonator guitars are all one-of-a-kind built to order custom guitars. The Schoen cigar box style resonator guitar Brad owns is known as the Turbo Diddly. Kurt builds his guitars out of centuries-old reclaimed wood such as from antique dynamite or liquor boxes. His guitars are prized by well-known aficionados such as Bon Jovi and Led Zeppelin. Owners of the Turbo Diddly model similar to the one played by Brad Carter include Billy Gibbons, lead guitarist for ZZ Top.

Here's wishing Brad Carter a successful recovery and many more years of guitar picking on his wonderful Schoen Turbo Diddly!
Posted by Acoustic Picker at 12:07 PM No comments: