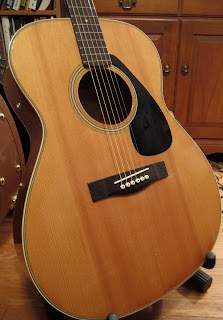 The Yamaha SJ-180 ("Semi Jumbo") was made between 1981 and 1985. Yamaha no longer provides the specs on this model beyond listing a Spruce top and Mahogany back, sides, and neck, but I measure this model with a lower bout width of 15.5" and depth of 4.25" and a narrow waist at 9.625", which puts it between an OM (Orchestra Model) and a 0000/M Grand Auditorium size. If you like a smaller guitar than a dreadnaught this could be a good inexpensive choice. Although it is an all-laminate construction, this vintage Yamaha model has a devoted following, especially with fingerpickers.

This guitar was another inexpensive eBay find in good condition. Besides needing a good cleaning, one of the tuner covers was bent such that it would not tighten cleanly to the headstock. As it happens, I already had another SJ-180 that I bought cheaply more for its case than for the guitar, which was so beaten up the fingerboard was separating from the neck at the cracked headstock.  I cannibalized the identical tuner off the first guitar and replaced the bum one on the clean SJ-180. After putting on extra-light Martin strings, I now have a great little finger-picking travel guitar that should be good to go for another 30 years.
Posted by Acoustic Picker at 6:20 PM