Here's another interesting vintage Yamaha guitar I recently plucked from eBay.   The Yamaha FG-336SB was made from 1977 to 1981.   It has a beautiful sunburst finish and an iconic Gibson songbird-style pickguard.  The FG-336SB is a dreadnaught-sized guitar with a very comfortable thin neck and loud resonant tone.  With a professional set-up, it really shines as demonstrated on the YouTube video I found below.

This particular guitar was advertised as in "pristine, mint condition."  When I received it, the guitar looked great until I took a look at the back, which was all scratched up and had two small cracks in the finish. 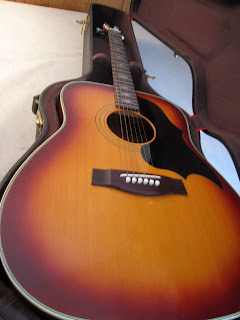 When I contacted the seller with pictures and suggested a partial refund based on the misrepresented condition, he did not want to believe that the pictures were of the guitar he had sent me.  After I uploaded video of the guitar, including the serial number, confirming both the identity and condition of the guitar, I received no response.  This is where the eBay platform really shines because within 24 hours of opening a case with eBay, the seller refunded me the partial amount I had requested in the first place.

This is a guitar that will really shine after it receives some TLC.  The strings look so ancient they could easily date back to 1981!  Besides buffing out the scratches on the back and cleaning the fretboard, I'll adjust the saddle to lower the action.  With new strings and a proper setup I look forward to finding this lovely vintage Yamaha sunburst a good home.
Posted by Acoustic Picker at 3:30 PM