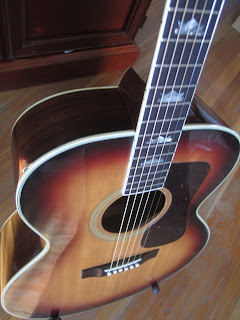 A neighbor and friend who also collects guitars recently picked up a Fender FJ-70 knowing that I really dig this guitar. I was really impressed with the last one I had, and to my ears this one played better than the several vintage Gibson guitars my friend currently has, so I eagerly negotiated a sale that involved a trade and a few greenbacks. 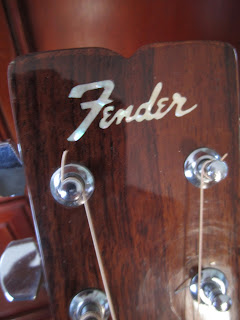 The Fender FJ-70 acoustic guitar has a rich tobacco sunburst finish with an aged solid Sitka Spruce top, Rosewood back and sides, ivory style trim around the body and up the sides of the fretboard, and deluxe crown position markers. Additional premium appointments include the MOP-inlayed Fender logo on the headstock. This is the only Fender in the F series to be offered in sunburst finish at the time. It was only made for a little over a year in 1980-81 and it is therefore quite rare. The FJ-70 originally sold for $360, but is now coveted for significantly more because of its playability, sound, and classic looks. The last one to sell on eBay sold for just under $600.  Fans of this guitar believe it is one of the best acoustics that Fender - better known for its electric guitar line-up - has ever made. I couldn't agree more.
Posted by Acoustic Picker at 6:21 PM No comments: 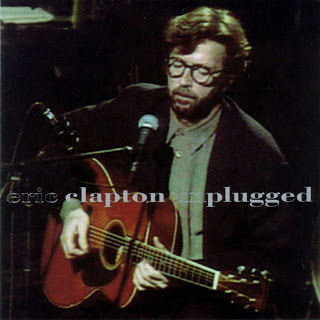 Eric Clapton's storied career as a guitarist and singer-songwriter goes back 50 years. Raised by his grandparents in England, and starting on guitar in his teens, he is the only three-time inductee into the Rock and Roll Hall of Fame, having been honored as a band member of the Yardbirds and Cream, and as a solo artist.

Best known for his bluesy-rock electric guitar work, his artistry on acoustic guitar erupted to world-wide acclaim in 1992 with his live MTV Unplugged appearance and corresponding album, which won six Grammy Awards and has since sold over 10 million copies in the United States alone. The album features acoustic versions of earlier hits such as Layla, as well as new compositions like the heartbreaking Tears in Heaven written following the death of his four-year-old son Conor who fell out the window of a New York City apartment building in 1991.

Clapton is no stranger to tragedy, having struggled with addiction in the 1970s and 80s and lost close friends and collaborators to substance abuse. In 1997, he founded the Crossroads Center in Antigua, a treatment center for addictive disorders.  Clapton has raised millions of dollars for the Crossroads Center by auctioning off some of his prized guitars from his extensive collection. These auctions have shattered records for guitar sales prices raising over $5M in 1999, $7M in 2004, and $2M in 2011.

His 1939 Martin 000-42, which featured prominently in his MTV Unplugged concert and on the album cover picture above, remains the most expensive acoustic guitar ever sold. This pre-war Martin features Brazilian Rosewood back and sides, which is coveted for its exceptional tonal qualities and is no longer available due to heavy de-forestation of its native habitat. The Style 42 appointments include abalone inlay around the soundhole and the top body border, with delicate snowflake pearl inlays on the fretboard. The guitar had a pre-sale estimate of $60-80,000 at the second Crossroads auction in 2004 and sold for $791,500 (including the buyer's premium)!

Indeed, Clapton is credited with single-handedly re-popularizing the smaller 000-size Martin guitar. With its shorter scale, notes are easier to bend for blues and other style fingerpickers such as Clapton. Clapton's long-standing devotion to Martin acoustics and his ability to make them sing has made this partnership a homerun for Martin.


Posted by Acoustic Picker at 6:43 PM No comments:

Two other guitarist friends of mine and I had the good fortune to be able to attend a master class this week with one of my guitar heros, French guitarist Pierre Bensusan.  One of those friends is none other than Boston-based French bluesman Bertrand Laurence who met Pierre many years ago when he opened for him at Johnny D's here in Somerville.  Not being familiar with Pierre's music back then, Bertrand only realized this was no ordinary gig when he saw a line of hundreds of people waiting to get in for that night's concert!

As folks settled in for the workshop, Bertrand greeted Pierre as a friend and colleague.  I also said hello to Pierre, reminding him that my dad had booked some of his earliest concerts in the States right here at UMass-Boston.  After a great master class, Pierre having signed CDs and being done for the evening, Bertrand suggested to Pierre that we get a beer together.  Pierre had not had dinner yet, so we ended up at Christopher's in Porter Square for a late bite and drinks. And that is when the real fun started with both musicians sharing tales from the road.

It turns out both of them had great Pete Seeger stories.  Early on in Pierre's touring career, the US immigration service had balked at granting him a work visa to tour here. Pete Seeger and Joni Mitchell, among others, had then written letters on Pierre's behalf as they shared the same agent.  Pierre had not had the opportunity to thank Pete for this until some 15 years later at a music festival in Vermont.  Pierre and his wife were having lunch in the performers' tent when who should sit down at the table next to them but Pete and his wife! 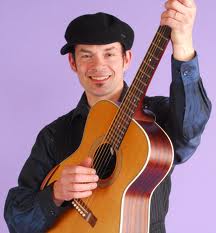 Bertrand also reminisced about being at a music festival in France when he offered to help an old hippie-looking dude carry multiple guitar & banjo cases he was unloading from his vehicle.  Dutifully following the guy all the way on to the main stage where 5,000+ fans waited, Bertrand then heard the presenter on the PA system announce to the crowd "Pete Seeger!" much to his shock and surprise!

Speaking of carrying equipment on the road, Pierre recalled playing in LA and having Pierce Brosnan come up after the show to chat.  When Pierre had packed up all his gear, Pierce generously offered to help him carry it out saying that Pierre had already put in his work for the evening. Shortly thereafter, Pierce Brosnan's Bond movie "Die Another Day" came out in theatres and Pierre was able to impress his then 10-year-old son with his experience having Bond help him as his roady!

Thank you to two great musicians for sharing a little bit of themselves for a great evening out in Boston!
Posted by Acoustic Picker at 5:05 PM No comments:

This week I was privileged to attend a master class with world-class guitarist Pierre Bensusan, one of my guitar heros.  One of the masters of the DADGAD alternate guitar tuning, Pierre is a student of the instrument and a prolific composer and recording artist.  Thirty of us brought our guitars for an interactive workshop with Pierre at the Music Emporium outside of Boston, not knowing what to expect, but only that it was a unique opportunity to spend time with a wonderful musician.

Before playing a single note on his beautiful signature Lowden guitar, Pierre started by sharing his philosophy on music, musicianship, and instruments.  Here is some of what I heard: (1) Music is not something we create, but it already exists autonomously as energy.  It is our role as musicians to allow the music to take place by working on ourselves as the first instrument and learning the vocabulary of the guitar as our second instrument so that this energy can be transmitted.  Thus, as musicians, we must pay as much attention to our posture, lack of tension, and approach to the guitar as much as to the discipline of learning how to manipulate the instrument itself and its vocabulary.  (2) On a related note, the quality of the music is determined by the quality of the composer/performer's listening.  The player needs to listen to be able to self correct errors and to become a conduit for the music that needs to be.  Pierre noted that it takes humility to get to the point where you can in fact disappear in service of the music.  I was very much reminded of hearing the late great song-writer John Denver in concert explain how his songs were independent entities that would come along and he just had to be ready to listen for them.

The rest of the session was spent addressing individual exercises for the right and then the left hand that challenged beginners and advanced players alike on articulation, syncopation, dexterity, and position.  After two hours together, we would not let him finish without performing one of his pieces and he generously obliged.  For a short primer on Pierre's techniques, check out the video below. Also, stay tuned for a follow up post wherein Pierre regales me and a couple lucky friends with tall tales from the road over a beer after the workshop...

Posted by Acoustic Picker at 11:37 AM No comments: