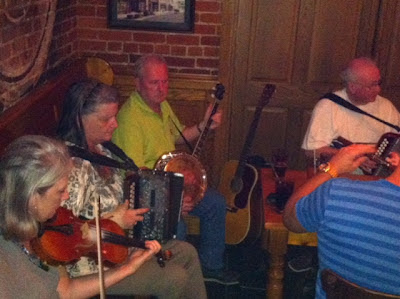 Monday nights are Irish Seisiun nights at the Green Briar Irish Pub in the Brighton neighborhood of Boston just around the corner from St. Elizabeth's Hospital.  Starting at 7pm, musicians of all levels are welcome to come learn and play along to the standards, while at 9pm, the regular seisiun begins with the veteran players.  This week, I took my son who plays violin to introduce him to some good fiddle music.

Propped up in the veteran musician's corner before the regular seisiun began I spied what looked like a vintage Martin guitar.  From afar, though, the logo was too faded to read and the guitar was sporting an uncharacteristic Gibson-like pickguard. Intrigued, I asked around until I met the owner, Terry, a good Irish lad.  He confirmed that it was in fact a 1964 Martin D-28, but that he had replaced the original pickguard after it developed a crack. He also noted that he would be mostly playing banjo that evening as without amplification guitarists tend to break a lot of strings trying to be heard over the accordeons, banjos, and fiddles.  Indeed, he recently had a Fishman pickup installed in the Martin for when he plays out in more formal settings.  With a pint of Guinness and friends old and new, you could do worse than to spend a musical evening with lads like these.  Cheers.
Posted by Acoustic Picker at 12:13 AM No comments: 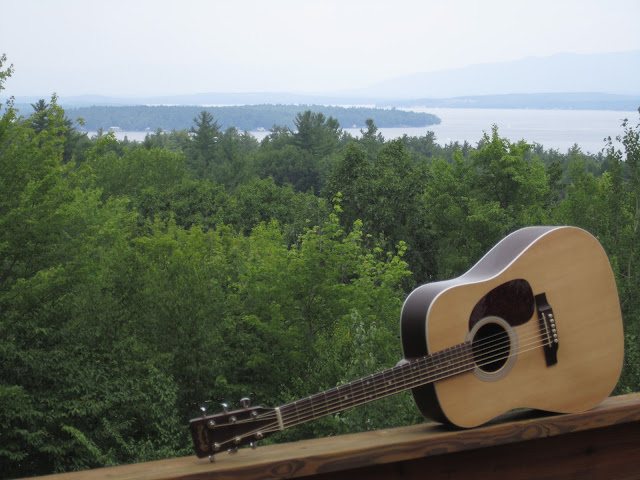 It's been a beautiful hot summer weekend up on Lake Winnipesaukee.  Besides the beach and good food, there's nothing like having some down time to pull out a guitar and make some music.

If you are looking for a solid-wood Martin travel guitar, you could do worse than the Martin Custom D that sells for just under $1,000.  Mine is a 2006 model with solid Sitka Spruce top, solid East Indian Rosewood back and sides, and solid Mahogany neck.  The satin finish throughout highlights the wood grain and makes for comfortable playing up and down the neck.  The tortoise-shell pickguard adds a nice retro touch to the otherwise simple appointments that are reminiscent of the Martin 15 series guitars of the 1940s. The sound is warm and woody with a great bass response, and even the wonderful Rosewood smell helps transport you to another place.  Happy Trails!
Posted by Acoustic Picker at 1:01 PM No comments: