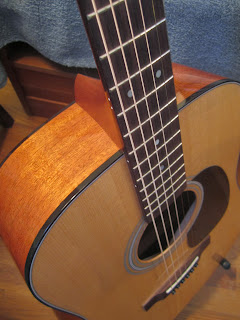 In another eBay bargain purchase, I decided to give the 2011 Martin D-18P a try. This is the classic D-18 with a solid Sitka Spruce top and Mahogany body, but Martin put its slimmer performance artist profile neck on this guitar and called the model the D-18P. Apparently, the high performance neck was popular because Martin went ahead and made it standard on the 2012 D-18, along with some other changes, making the D-18P designation obsolete after only one year. (Note that one should not confuse this model with the 1987-1989 D-18P, which was the designation made by Martin for D-18 model guitars that they continued to make with the old neck style after a change to a lower profile neck on the standard D-18 in 1987). Street value new for the 2011 Martin D-18P is $2,000, while current Blue Book value in excellent condition is between $1,175 and $1,375.

When I received this brand new guitar I was initially disappointed as it played all buzzy and was in serious need of a proper set-up. Now that I have gotten it back from my guitar tech, though, I can't stop playing it. What a difference! This is a responsive guitar that is wonderfully playable all the way up and down the frets. It sports a 1.75 inch nut (compared to the earlier D-18 nut at 1.6875 in.), a compensated saddle, and a low profile high performance neck, which makes it easier on the hands and ideal for finger picking. The tone is super clear and bright. I applaud Martin's move to the faster neck on its iconic D-18 model, which makes this dreadnaught an even better workhorse for the serious player. If you haven't played any of these new Martin D-18's, I think you'll be impressed when you finally do.
Posted by Acoustic Picker at 3:45 PM No comments: 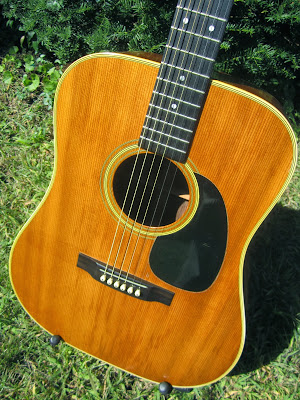 Serendipity struck again last month as I scored a beautiful 1970 Martin D-28 guitar off of Craigslist. Turns out the seller is the same guy who had previously sold me a wonderful Martin 000-1. He is slowly whittling down his collection as he no longer plays much due to some chronic tendonitis. I peppered him with questions over the phone and confirmed that the guitar was in excellent condition so I headed over to see it within hours of its listing.

The D-28 is the flagship Martin dreadnought guitar. It features a solid Sitka Spruce top and solid East Indian Rosewood back and sides. The 1970 D-28 model was the first to be made with East Indian Rosewood after Brazil put an embargo on Brazilian Rosewood logs, making it impossible for Martin to obtain sufficient quantities. It has a Blue Book value between $1875 and $2350 in excellent condition. By comparison, a 1969 D-28 made with Brazilian Rosewood is valued between $4500 and $6500 in excellent condition!

Before even picking this D-28 up, I was struck by its darkly burnished golden hue that only comes with decades of aging. The plastic binding around the body had likewise yellowed, but was still tight to the body with no cracks. The guitar itself had no cracks and only a few minor dings and faint checking in the finish. The frets and fretboard were in surprisingly good shape given that the guitar was definitely played. The seller explained that he had had the guitar recently serviced by a well-respected local luthier who had re-glued the slightly shrunken pickguard. That the guitar was also perfectly set up at that time was immediately obvious upon playing the instrument. This is a booming guitar that played comfortably up and down the neck with no intonation issues. At this point I knew I might not ever get another chance to own such a beautiful instrument at the asking price so I gladly paid up and left with my prize. 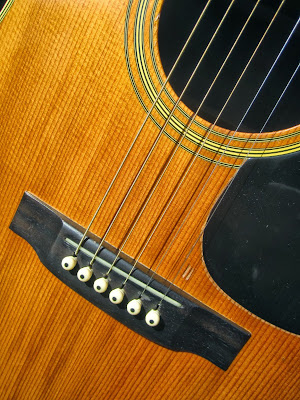 By the time I got home, though, it was obvious that I had a mold issue as the guitar case was stinking up the car. When I took the guitar out, it too was impregnated with a powerful musty smell. Bummer!

The guitar case I set open outside in the sun for a week with little effect. Products like Febreeze simply mask the smell, but don't attack the cause. If baking soda and a white vinegar spray don't work next, sadly I may just have to trash the case (despite it having a certain mojo, including several bluegrass festival stickers). If you have successfully banished that musty smell from a guitar case, let me know what was your secret formula in the comments below.
Posted by Acoustic Picker at 9:24 PM No comments: