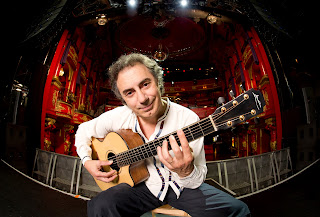 I first heard virtuoso French guitarist, composer, and singer Pierre Bensusan play live in Cambridge in approximately 1980. My dad brought me as he knew Pierre, having arranged for his first North American concert in the mid-70s (held at UMass-Boston's then new Harbor Point campus). The guy blew me away with his shimmering open tunings and effortless fingerpicking compositions.  Wow.  He has since toured the world many times over and established himself as one of the top fingerstyle guitar players/composers out there with 13 albums to his credit, his own signature Wyre guitar strings, and no fewer than three signature guitar models, including a beautiful Lowden that lists for only $8425!  He was named "Best World Music Guitar Player in 2008" by Guitar Player Magazine Readers Choice.  If you are unfamiliar with Pierre's playing and passion for teaching check out his YouTube channel.

Now you can spend a summer week in France learning at the feet of the master at Pierre and his wife's renovated 1830 stone farmhouse in Champagne country within an hour of Paris.  This music retreat, open to amateur and professional fingerstyle guitarists from the world over, has sold out for 2012, so Pierre has added another week August 25th to 31st.  Only seven of ten spots remain so you may want to start booking your flights now!
Posted by Acoustic Picker at 8:33 PM No comments:

Make Your Own High-end Acoustic! 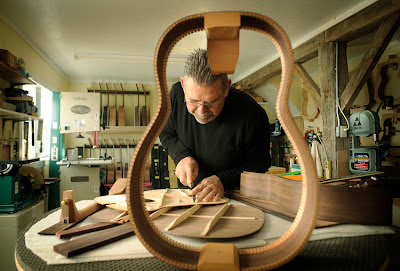 Ever dreamed of owning a custom-built guitar made for you by an artisanal craftsman? For most the price is prohibitive and it is not uncommon to have to wait years for delivery.  Now for less than the price of most customs, you can make your very own during a six-day
intensive workshop offered by a Maine guitar maker!

As of last month, this guy is now available for workshop bookings year-around.  He will take you under his wing for a week, Monday-Saturday, 9am-5pm, and guide you every step of the way as you build your own standard dreadnought or Triple 000 14-fret guitar in his workshop at William Russo Guitars.  How sweet is that?!


Posted by Acoustic Picker at 5:23 PM No comments: 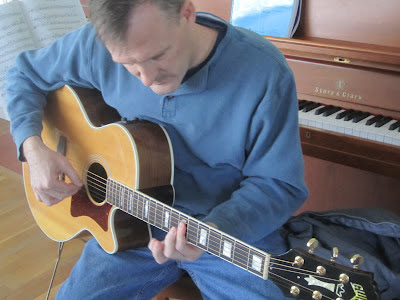 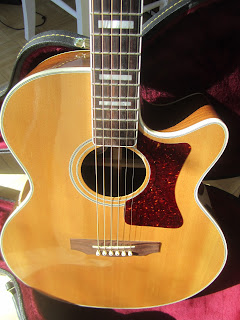 I drove an hour down to the Mass/Rhode Island border this morning to take a look at another promising guitar: a 2001 Guild F-47RCE.  It is a one-owner guitar built in Westerly, RI the last year before the manufacturer moved out West after the Fender buy-out and later discontinued the model.  The 2001 catalogue price was $2,199, but the Music Mall in Worcester, MA sold it new in 2002 for $1,599 (the seller had the original paperwork, which is always a plus).  As an aside, note that one should not pay full retail for a new high-end guitar, even at a music dealer. Such guitars are routinely sold at significant markdowns to MSRP.  You should also always inquire about a professional discount on top of the markdowns if you can make any plausible case that you are a professional "musician."

This Guild was in good condition and the asking price was attractive given that this model guitar is currently listing on Ebay used for $1,499 and the web is full of glowing reviews for this guitar.  In fact, since listing it yesterday, the seller mentioned he had checked Ebay and was obviously thinking he should have listed it for more.  After noodling on the guitar both with and without amplification and a little bit of friendly haggling, I left with the guitar just under his asking price.

Now that I'm home getting to know my new friend, there is a slight buzzing from what sounds like the inside body of the guitar, especially when playing the higher registers.  It does not appear to be a fret or neck problem (loose and resonating pickup parts perhaps?) and I am hoping that upon closer examination by a professional there is an easy and inexpensive fix.  Overall, the sound is big and bright and I am hoping that with an easy adjustment to bring the high action down a bit this will be one sweet instrument.

Posted by Acoustic Picker at 3:41 PM No comments:

The first time I bought a guitar I was barely a teenager and the year was 1978.  After scouring the printed Want Ads you could pick up for $.75 at the convenience store, my dad drove me to check out a used 1972 Martin D-18.  About all I knew then as a 13-year-old was that Martin was among the best. I was not disappointed.  The guy selling was a singer and had used this guitar some for accompaniment.  This guitar was in great condition and had a big beautiful sound.  I shelled out $600 of my hard-earned cash from my weekend paper route for my first real purchase ever.  It came with a heavy wood guitar case.

That Martin guitar later traveled with me everywhere, including France, Spain, Switzerland, and Venezuela.  It played campfires to concert stages, clubs to recording studios, and street corners from Harvard Square to Caracas.  It picked up a number of cosmetic scars along the way, but it held up beautifully despite rough treatment.  I had that guitar for about 18 years before I got married, had kids, and moved on to other priorities including a career in civil rights law.

Decades later I can still remember the sound, feel, and smell of that Martin guitar - the thrill of owning and playing it.  While that particular guitar is long gone, I have decided this day to embark on a quest to discover and resurrect dusty vintage and premiere guitars so that they can impart such pleasure again.  And the internet has made the search so much easier!  On Ebay alone tens of thousands of guitars are listed daily for comparison, many with beautiful pictures and all the specs. 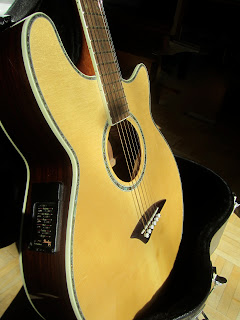 Today, Saturday, a search of local New England Craigslists yielded several interesting candidates.  In fact, as I returned to my computer after lunch a Dean Nouveau CR acoustic/electric w/ a hardshell case was just posted a couple of towns over at a very attractive price.  A quick internet search revealed a $769 original list price and good reviews.  It turns out this model guitar was only made for two years (2001-2002) and judging by the lack of any online listings it's not easily available.  It's a visually stunning guitar with a beautiful double cutaway body and sparkling abalone inlays that give the look of a much more expensive instrument.  The included picture in the Craigslist posting did not reveal any obvious issues so I made the call and within fifteen minutes of the listing I had set up a showing for that evening.  Cool!

On my way over I borrowed a small amplifier and guitar cord from my brother, the professional musician in the family, and headed over to check things out.  The owner had bought this instrument used, had never plugged it in, and had clearly not played it recently as the case was dusty and the strings were ancient.  As I tuned up and strummed the instrument, the low E string did noticeably buzz at the first fret.  An adjustment was clearly needed, but might be as simple as putting in a new set of medium light strings.  Fret work or a tweaking of the adjustable truss rod that controls the tension in the neck of the guitar might also be needed.  I'd have to go to a guitar shop for that as I do not have my own workshop or the expertise for this.  Then, when I plugged the guitar into the amp, the guitar's built-in preamp would not stay on consistently even after switching out the battery.  I also noticed that the case, which was in good shape, was not a Dean case, so the guitar did not sit snuggly, but floated around a bit. 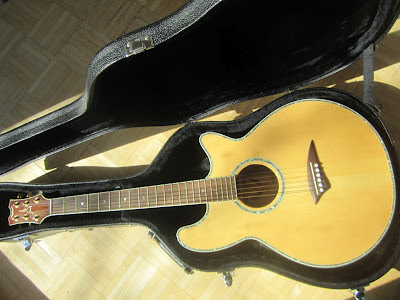 On the plus side, there was absolutely no wear on the fretboard.  Clearly, this guitar had seen very little use. Cosmetically, there were only three tiny dings on the top, and no apparent structural issues.  All in all, although it was hard to determine the quality of the guitar's tone and action with the ancient guitar strings it was sporting, this was a visually satisfying guitar with what appeared to be reasonably easy fixes. After going over all the issues with the owner and the possible need to replace the pre-amp, we agreed on a very reasonable price.  This was not a tough decision! Even if I have to sink in a few bucks to get this back to playing shape and another $80 for a brand new Dean case, I'll have an instrument easily worth more than what I paid for it.

This might be the start of something both fun and worthwhile!
Posted by Acoustic Picker at 2:00 AM No comments: