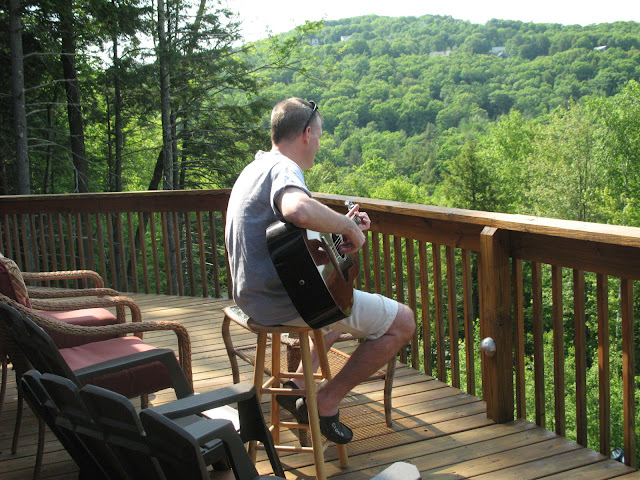 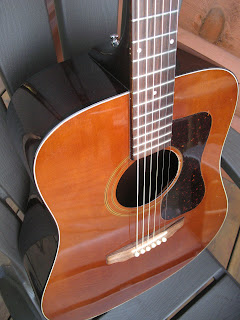 Spent a glorious Memorial Day weekend in New Hampshire's lakes region strumming and picking on my latest Craigslist find, a 1981 Guild D-25M.  This is a classic Dreadnought-sized guitar added to the Guild line in 1968.   It is the most popular Guild model ever built. Originally an all-solid Mahogany guitar, the D-25 was switched to a Spruce top and a laminated Mahogany arched back in 1976.

My 1981 model, built in Westerly, RI, has the arched back, solid Mahogany sides, and a Mahogany-stained solid Spruce top (hence the "M").  Because of its large size and deep arched body, it has wonderful volume, projection, and sustain.  Also known as a "Bluegrass" model, the D-25 is a great finger-picking guitar that can hold its own against a banjo and fiddle.  It is also a favorite of buskers, not only for its volume, but because it is nearly indestructible.  This is a very solidly-built guitar that can withstand some abuse and still sound great, or in the words of Guild, it is "Made To Be Played."

Now that I'm back in Boston, stay tuned for an A-B comparison with my 2011 all-solid Mahogany Chinese-made Guild GAD-25!
Posted by Acoustic Picker at 11:46 PM No comments: 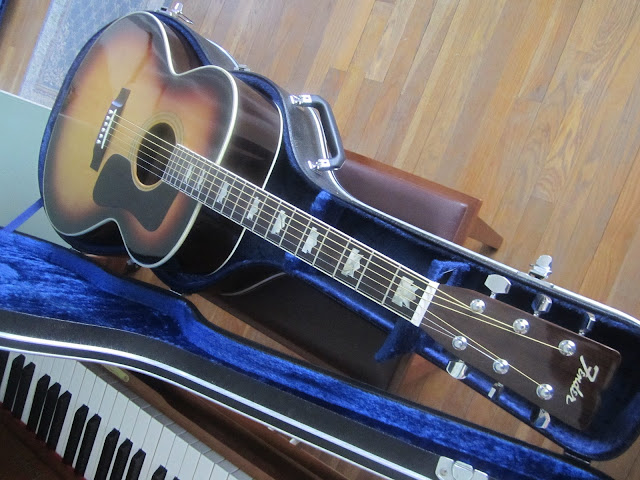 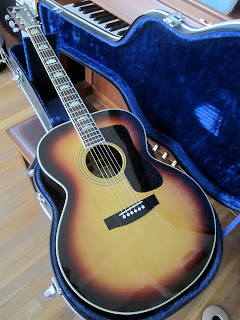 This weekend I found a good new home for my Fender FJ-70.  I just was not playing it enough to justify holding on to it, even though it is arguably one of the nicest models from the halcyon days of Fender acoustics.  I sold it to someone looking for a jumbo-size acoustic, and the FJ-70 is arguably the nicest one you can buy for the money, if you can find one.  The only Fender in the F series to be offered in sunburst finish at the time, it was only made for a little over a year in 1980-81.

It is a beautiful guitar.  I even dig the attractive abalone-inlayed Fender logo on the headstock.  Rest assured that this is a guitar that also sounds as great as it looks.  I feel good that it is in the hands of someone who will appreciate it as I did and play it as much as it deserves.
Posted by Acoustic Picker at 11:15 PM 2 comments: 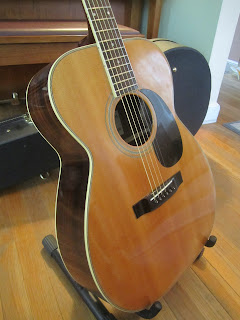 Visited with a fellow guitar enthusiast last week who has been looking to sell his vintage Fender F-50 acoustic guitar.  The F-50 is a grand concert style guitar with a solid Spruce top, Rosewood back, sides, fingerboard, and bridge, and Mahogany neck, made in the USA.  It has the design and finish of a pre-war Martin 000 14-fret body, including the Martin style 28 herringbone body binding and the teardrop pickguard.  In fact, but for the Fender logo and V notch in the top of the headstock it is basically a Martin look-alike, which may explain why the F-50 was short-lived, only being produced in 1980.  All but one of the original Fender F Series guitar models were discontinued by 1981.  Fender then introduced a new "Standard F Series" in 1982 with a completely different headstock design with a swoop top.  The pick guard design was also changed to have a straight edge along part of the top. 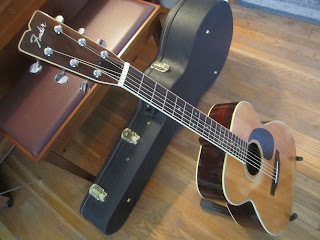 This guitar had some significant cosmetic wear, but the natural finish top had turned an attractive golden hue.  The action was low and very playable.  The tone was bright, but a little muddled without the crisp note definition of my Martin 000-1 and a little tinny.  Overall, though, the guitar had an attractive Martinesque vintage feel.  As my friend was willing to part with it for a very reasonable price, I couldn't resist.  This weekend I loosened the truss rod to raise the action just a tad and eliminate some buzzing at the A and low E strings.  I also replaced the light Martin strings with medium Elixirs to get a warmer sound.  When I brought it along to a Saturday night gathering with friends, it was the toast of the evening.  The friends' son just back from college took a shine to it after giving it a go.  It would make a good replacement for his starter guitar as he has recently begun getting more serious about his playing.  It is also a perfect travel guitar, inexpensive and already broken in.  I left the guitar with him on trial and today he confirmed that it had found a good new home.  Mission accomplished.
Posted by Acoustic Picker at 2:26 PM 6 comments:

File this under "too cool not to share." And believe you me, it's gone viral big time and in a hurry. More than four million hits in its first week online! Noah is only eighteen, but no Justin Bieber. Instead, let him blow you away with his mature, soulful voicing and driving guitar re-interpretation of LMFAO's raunchy anthem. This kid is talented, and he sure makes his Breedlove guitar sound good! Enjoy.
Posted by Acoustic Picker at 6:39 PM No comments:

Master luthier Dana Bourgeois traveled down from his 1860's mill-house workshop in Lewiston, Maine to the Music Emporium in Lexington, MA last night to regale a large crowd of enthusiasts with a glimpse into his artisanal guitar-making process. After passing around an unfinished Adirondack Spruce top with scalloped braces, Bourgeois continued the show-and-tell by carving down the braces with intermittent tapping of the top as he explained how he voiced it to obtain as many tones as possible.  Little by little, as he carved away at the braces, shared personal anecdotes and tricks of the trade, and fielded dozens of questions, the top became more flexible with varied tones across its plane.

What became very clear is that the optimal voicing of any top is more art than science as every piece of wood has its own characteristics that, as Bourgeois explained, are unpredictable and unique.  An artisanal guitar maker's experience allows him or her to recognize these qualities and obtain the optimal balance between the responsiveness of the wood and its structural integrity.  Mr. Bourgeois has been designing and building acoustic guitars since 1974 and explained how he learned early on by repairing wonderful pre-war Martin guitars before these became recognized as premium "vintage" guitars.  The results could be seen in the dozen Bourgeois guitars we were able to assess after the presentation, from parlor-size to dreadnoughts, in beautiful hand-selected tonal woods.  He has also been experimenting with a vintage varnish that offers much better clarity and breathability, and with beautiful results judging by the two guitars I examined with this finish.  If you are gassing for a high-end acoustic by one of the best small shops in the world, head over to the Music Emporium or check out Bourgeois' very well-done website and order yours today.
Posted by Acoustic Picker at 12:29 PM No comments:

This weekend I took my wife to NYC for her 40th birthday, staying at the beautiful new Intercontinental at Times Square.  Up first was a matinée performance of "Once," the most Tony-nominated show of 2012, with its acoustic guitar-heavy score, set, and book. What a great show! Think Irish Sesiun with a contemporary edge.  Even as the audience files in for the show, the actors - all musicians - are on stage jamming on acoustic guitar, fiddle, mandolin, banjo, cello, and piano. The simple set is a large open space with a bar and the audience is encouraged to come up and buy a drink before the show (and at intermission) and mingle on set.   From then on we follow the story of a singer-songwriter-guitarist Guy in Dublin who meets a Girl who plays the piano and sings.  She inspires him to give his music another chance, they make beautiful music together, but they have to deal with their respective unfinished relationships while it is clear they have fallen in love.  The arrangements for guitar and piano are simple and effective, allowing for the full power of the lyrics to hit you like a ton of bricks with the raw emotions of love.

Special kudos to the sound crew, as the balancing of the wireless mic'ed voices and acoustic instruments is extremely well-done (sound designer Clive Goodwin, who workshopped the show at the ART here in Cambridge, has one of Once's 11 Tony Award nominations).  The lead Guy of "Once" plays what looks like a well-worn Johnny Cash-model Martin D-35 guitar that rang out whether finger-picked or strummed.  Indeed, the Martin guitar company has recently become the official guitar and guitar strings sponsor of "Once" (earlier promotional materials and video of the musical had Guy playing a well-worn black Takamine like the original Guy in the original movie from a few years back).  Well played C.F. Martin and Co.

Later, we had time to drop in on Matt Umanov Guitars in the West Village before dinner.  They had a good selection of Martin and Taylor guitars, among others, but I was disappointed not to find any new Guilds in stock to test drive even though they are a Guild dealer.  In fact, the only acoustic Guild in the whole store was a used 1995 D-55.  I took the opportunity to put it up against Martin's new HD-28 that I have raved about before and that they had in stock, but the Guild came out ahead of this particular guitar in my book.  My wife even commented that the D-55 was noticeably more resonant than the HD-28 from her vantage point across the room.  Too bad they wanted $1995 for it. Bargain hunters are out of luck at this iconic store...

How I came to also play a 1971 custom spanish guitar worth $10k later that weekend will have to wait for a later post...!
Posted by Acoustic Picker at 8:32 PM 1 comment: