Canadian commander of the International Space Station (ISS) Chris Hadfield just returned to earth two days ago accompanied by the release of his music video of David Bowie's iconic "Space Oddity" recorded in space. It stars the Commander, an accomplished musician, floating around the Space Station with the first guitar in space, an acoustic parlor-size guitar, the Larivée P-01. The video also features superb footage of the Space Station and Earth from space. It's garnered 11.5 million views in three days. Don't miss this!

NASA psychologists sent the guitar up to the Space Station to help with the mental health of its astronauts. A high-quality parlor-size guitar was required as space is at a premium on the Space Station and it costs upward of $45,000 per kg to ship stuff up there. Two identical Larivée P-01 guitars were thus purchased from a local Guitar Center in Houston so comparisons between the instruments, one on earth and one in space, could be made. The Larrivée parlor guitar Commander Hadfield played has actually been on the International Space Station for over a decade now and has completed close to 60,000 orbits around earth! The P-01 model has been out of production for over a decade according to John Larrivée, Jr., but he announced today that he is taking orders for a limited edition "ISS Commemorative Parlor" that is a P-01 replica. It will be interesting to see whether all the buzz around this space recording will revive interest in parlor-size guitars the way Eric Clapton was able to revive interest in 000-size models after his MTV Unplugged success.

Sexy and I Know it! 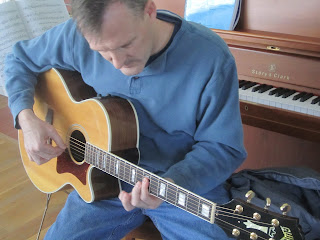 In case you guys out there needed any further encouragement to play the guitar, two recent studies confirm what we all already knew - that playing the guitar is attractive to the ladies. In fact, it turns out just holding a guitar in your Facebook avatar will almost triple the probability that a random woman will accept your friend request according to an Israeli study published in Letters on Evolutionary Behavioral Science. In a French study published in Psychology of Music, just carrying a guitar case when approaching a random woman more than tripled the probability that she would give out her phone number. (Hat tip to Fender guitars).

No study yet on swooning percentages when the guy can actually play the guitar (and sing!), but to illustrate the point, here is young guitar phenom Noah rocking his original acoustic arrangement of LMFAO's "Sexy and I Know It!" Enjoy. Seventeen million others already have!


Posted by Acoustic Picker at 5:30 PM No comments:

Mark Knopfler and his band Dire Straights burst onto my musical consciousness with his hit Sultans of Swing off their debut 1978 Dire Straights album. If you want to hear how an electric guitar can be made to sing, check out Mark's virtuoso live performance of the classic hit below.

What may be less known is that Mark is also considered a fantastic acoustic guitar player. In fact, Martin has issued two signature limited edition Mark Knopfler acoustic guitars!

The Martin HD-40MK is a dreadnaught-sized guitar with solid Italian Alpine Spruce top and solid East Indian Rosewood back and sides. Only 251 of these numbered and signed guitars were made in the summer of 2001 with a current Blue Book value in excellent condition of $2,250-2,750. A whimsical feature of the guitar is the etched reproduction on the inside heelblock above the model number of a dinosaur Masiakasaurus Knopfleri, named after Knopfler by the paleontologists who were listening to Dire Straights when they discovered this previously unknown species in Madagascar.

The Martin 000-40S Mark Knofler "Ragpicker's Dream" signature model was similarly a limited-edition run of only 155 guitars in the summer of 2006. This Grand Concert 12-fret 000-style guitar has the same combination of woods, but features a slotted headstock and a pyramid style bridge evocative of Martin's pre-war parlor-size guitars. Blue Book value on this guitar is at $3,250-3,750.

Among Knofler's personal collection of fine vintage instruments, his 1938 Gibson Advanced Jumbo has often been featured on his albums.  Here he is demonstrating some basic picking techniques on the guitar, including his own distinctive take on clawhammer style.  It's the next best thing to an in-person lesson from a guitar legend (with the bonus that you can study it over and over again). Brilliant!

And here's a more recent Knofler guitar-playing primer (2017), showing off so more of his vintage guitars.